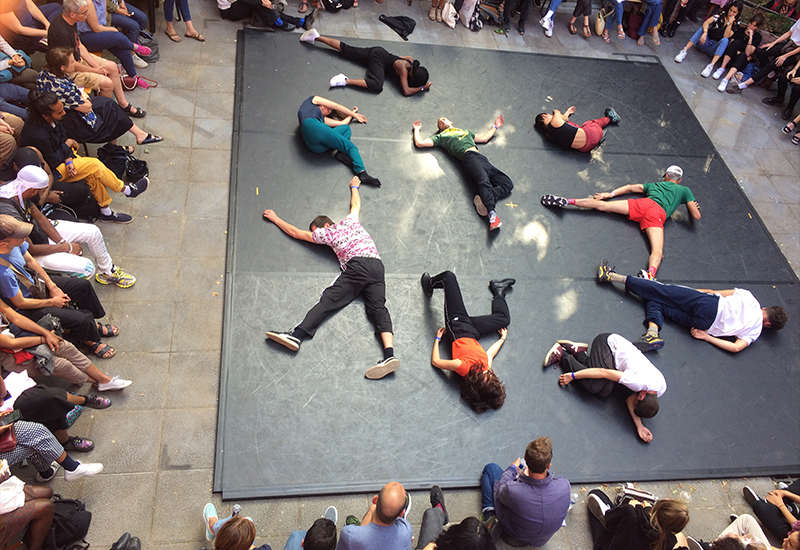 The Talents Adami Théâtre scheme and the Festival d’Automne à Paris invites a director to work with young actors and actresses. This year, with Le chœur, Fanny de Chaillé gives them the opportunity to experience chorus work, based on the writing of the poet Pierre Alferi, and in doing so to rethink the place or statute of the actor.

Onstage, the ten actors and actresses form a chorus. A unity. A body. There is no identifiable protagonist nor attempt at individual personification, each of them forms part of a collective experience. In Fanny de Chaillé’s new show, part of the Talents Adami Théâtre scheme, the chorus becomes both the form and subject of the piece. Thanks to this initiative, past participants of which include Gwenaël Morin, Joris Lacoste and tg STAN, she will be passing on the fundaments of her practice to young performers and prompting them to question the relationship between stage and spoken word. This theme was already present in Désordre du discours, performed during the Festival in 2019, the background material for which was Michel Foucault’s inaugural lecture at the Collège de France. In Le chœur, her starting point is the work of the poet Pierre Alferi, and in particular his poem “Et la rue”, taken from his Divers chaos anthology. This form of writing, similar to a musical score, mixes political action with the metrical rhythm of the flow of poetry. Onstage a polymorphous form takes shape, and for which the actor or actress must take responsibility: that of the collective.

The NEWSPAPER and The RADIO
et la rue
le choeur
These extensions of the stage project are designed by the team during each rehearsal period.

Here are the numbers designed between the Atelier de Paris and the CND in Pantin in September and October 2020: