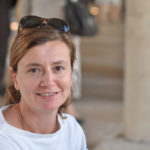 After her Aesthetics university studies at the Sorbonne, Fanny de Chaillé works with Daniel Larrieu at the Tours National choreographic center. She simultaneously collaborates with Rachid Ouramdane and also performs in   Gwenaël Morin’s plays. She participated in visual artists’ projects, such as  Thomas Hirschhorn or Pierre Huyghe.

Since 1995, she makes her own  installations and performances: Karaokurt (1996), La Pierre de causette (1997), Le Robert (2000), Le Voyage d’hiver (2001) and Wake up (2003). In 2003, she starts developing work for the theatre with pieces such as, Underwear, pour une politique du défilé (2003), Ta ta ta (2005), AMÉRIQUE (2006), Gonzo Conférence and À nous deux (2007). Furthermore, Fanny de Chaillé collaborates with Emmanuelle Huynh as a dramaturg for Crible and ShinbaÏ. She’s the assistant of Alain Buffard in Tout va bien (2010) and Baron Samedi (2012), and joins a Session poster initiated by Boris Charmatz at the Avignon Festival in 2011. With Grégoire Monsaingeon, she co-founded the musical duet “Les Velourses”, with whom she creates Mmeellooddyy Nneellssoonn in the «albums» series of Théâtre de la Cité Internationale, in Paris, which she’s the associate artist during three years. In 2011, she creates Je suis un metteur en scène japonais based on Thomas Bernhard’s text Minetti and Passage à l’acte, co-signed with visual artist Philippe Ramette.

In 2013, she’s guest artist at the Centre Pompidou’s Nouveau Festival and presents the project La Clairière.

Her most recent pieces, LE GROUPE (2014) based on Hugo von Hoffmannsthal, and CHUT (2015), a tribute to Buster Keaton, were  conceived at the Espace Malraux, Scène nationale de Chambéry et de la Savoie, where she’s presently associate artist. Her collaboration with Pierre Alferi begins with COLOC in the frame of L’objet des mots/Actoral 2012, and the duo Répète (Concordanses 2014). Today it continues with LES GRANDS (2017 premiere) in which she questions adulthood status and the different reality layers which constitutes a person.

She was an associate artist at the CND in Lyon from 2017 to 2020 and offered “Journées d’étude” to the artistic community, amateurs and students which allowed meetings and exchanges developed around a theme for reflection and discussion (“Dramaturgy in dance”, “Interpreter in dance”, “Production, issues and uses” or even “Making dance speak”).

Since 2014, Fanny de Chaillé has been an associate artist at Malraux, scène nationale Chambéry Savoie where she created her most recent piece intended for university amphitheatres; DÉSORDRE DU DISCOURS (2019) after “L’ordre du discours” by Michel Foucault (ed. Gallimard) also presented at the Festival d’Automne in Paris.

She also imagined an AUDIOGUIDE project: LE MONT-CENIS (2019), an audio documentary that gives voice to its inhabitants as well as an installation project for public spaces POEME MONUMENT (2020) in collaboration with the designer David Dubois.

Fanny de Chaillé is invited to direct 10 young actors for Talents Adami Théâtre 2020 and the Festival d’Automne à Paris: she offers them a project entitled LE CHOEUR based on the writing of the poet Pierre Alferi.

David Dubois is an independent designer and scenographer. He graduated from l’ENSCI – les Ateliers (Ecole Nationale Supérieure de Création Industrielle, Paris) in 2003, he currently lives and works in Paris. David chose to develop his work in the areas of design and fashion. He alternates between research projects, commissions, collaborations and many self initiated projects and pieces.
His approach is characterized by an ongoing commitment to create new objects and invent new functions by combining, recycling and adapting useful objects and unexpected items and by using them in a totally new way. He creates a new appropriation and research of our everyday environment.
His objects are marked by continuous experimentations and associations of different materials, with a particular attraction to textiles and flexible materials.
Since the creation of his own studio – duboisproduct – in 2005, David Dubois works for brands, manufacturers, museums and galleries. He has notably collaborated with Bless, Martin Szekely, Issey Miyake, l’Herbe rouge, Christian Lacroix, Lalique, Kronenbourg, the Mudam, the Villa Noailles, the CIAV, the CIRVA and the Kadist Art Foundation. His work is produced by Bless, FR66, gallery MICA, gallery Sémiose, Ilivetomorrow, CIAV and the gallery Kreo in Paris, which represents him today.
His objects are included in public and permanent collections of the Centre George Pompidou, FNAC (Fonds National d¹Art Contemporain, Paris), FMAC (Fonds Municipal d’Art Contemporain, Paris), Mudam, Villa Noailles and Grand-Hornu.

Before making the double bass her instrument of choice, Sarah Murcia studied the piano (first at the CNR in Boulogne, then with François Bou), and the cello for a number of years. She began her apprenticeship in the classes of improvised music given by Manuel and Patricio Villaroel, later becoming a student of Jean-François Jenny-Clark. She obtained a degree in musicology at the Sorbonne and was awarded a prize in orchestration by the Schola Cantorum. She has accompanied singers, (Charlélie Couture, Franck Monnet, Fred Poulet, Jacques Higelin, Piers Faccini, Elysian Fields) and improvisers (Sylvain Cathala, Steve Coleman, Kamilya Jubran). Some of these encounters have developped into lasting musical partnerships. For the last ten years she has played with the Magic Malik Orchestra, and Las Ondas Marteles (Nicolas et Seb Martel).At the moment she is a member of the groups Beau Catcheur (duo with Fred Poulet), Sylvain Cathala trio (with Sylvain Cathala et Christophe Lavergne), and Pearls of Swines (with Fred Galiay, Franck Vaillant, Gilles Coronado). In 2001, she founded the group Caroline with drummer Franck Vaillant, guitarist Gilles Coronado and saxophonist Olivier Py. Saxophonist Guillaume Orti was added in 2012.As an arranger, she is involved in various projects, particularly Paul Ouazon’s music programs for television and the research atelier of Arte France.In 2011, Sarah Murcia and Kamilya Jubran initiated the project Nhaoul’, adding three musicians to their original duo (violin, viola , cello), and in 2013 they launched the project Wasl, a trio with Werner Hasler (trumpet et electronics).Sarah Murcia also composes music for the cinema and the dance. In 2012 she became musical director for “Baron Samedi”, the new creation of choreographer Alain Buffard, and presents also “Everybody”, a duo with the choreographer and danser Mark Tompkins. In 2012, she does a one year artist in residency at the “Dynamo de Banlieues Bleues” and presents several projects (Caroline and Guillaume Orti, Nhaoul, her solo, as well as a teaching project at the Paul Eluard highschool in Saint Denis, and a creation with BOA and Beau Catcheur).In 2014 is an artist in resdence at the Triton for a certain number of projects and cartes blanches (Beau Catcheur, a duo with Magic Malik, Caroline and Guillaume Orti, as well as a teaching project with Peter and the wolf for 4 vintage synthesizers).2015 will be the occasion for two new creations : “Never Mind the future”, over the Sex Pistols’ album, with Caroline, Benoit Delbecq and Mark Tompkins ; as well as “Nhaoul/Habka”, with Kamiilya Jubran and three new musicians (Régis Huby – violin ; Guillaume Roy – Alto ; and Atsushi Sakaï – cello).This same year, she joins Louis Sclavis’ quintet with Dominique Pifarély, Benjamin Moussay et Christophe Lavergne. Sylvain Cathala’s trio expands with three new creations – first with Kamilya Jubran, then with Marc Ducret and Mathias Malher, and finally with Guillaume Orti, Bo van der Werf, Marc Ducret and Benjamin Moussay. She also performs in duo with Rodolphe Burger.