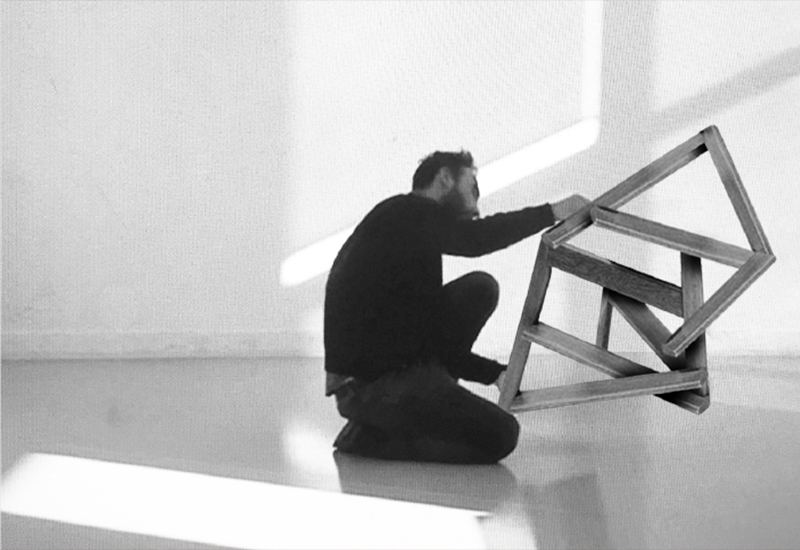 In line with the works done around language in the fifties by different artists and poets such as Bernard Heidsieck, Henri Chopin, François Dufrêne… and their action, sound, direct poetry… I suggested to the designer David Dubois to develop an object that would take the poem out of the page, so that one would experience it by reading it while associating it to a movement.
Somewhat between a hut and a playground, POÈME MONUMENT is an installation intended for public spaces: Theater halls, rehearsal studios, exhibition venues, gyms… This evolving installation, extensible and changeable over time, will be made from modules, shapes, objects, light structures, diverse elements which when put together will form an itinerary. An Itinerary to be experienced through a combined reading of presented texts.
This space provided for the public intends to create movement – eye movement but also movement of the body – from a score and a rhythm, the poem’s.
Setting a choreography based on everyday movements: walking, crawling, climbing, sliding, jumping, and giving the impulse to read a text, a poem, differently.
It is the text’s score that will enable the body to move. Several entry points into the monument will be possible. They will give the opportunity to read simultaneously different poems. The score from the poem scattered into space will be an invitation to perceive the text choreographically. The object-monument will be built around this moving score, this choreography.
To build the architecture around the movement.
Through the building of a space, imposing a movement that allows reading.
What kind of gestures for what kind of texts? Which typography, which materials are used for what kind of texts or gestures? How can we indicate a continuity in the text without resorting to signposting, indication, or injunction? How can we organize time, silence within a score? How can we influence reading, movement  by the making of a space? How to make several scores come together and still being able to tell them apart from one another, how does a signpost become meaningful. To think of the monument being activated and deactivated, visible with the possibility of being experienced from within, but also visible with the possibility of observing it from the outside.