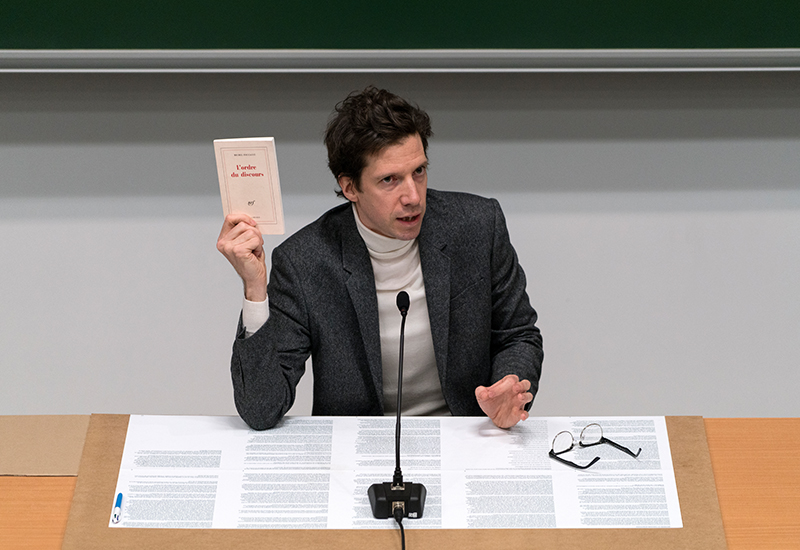 The fabric of political language

Addressing, questioning oneself on what is today an electoral campaign by drawing on the study of a discourse or several political discourses. This is how I want to participate to the « Campaign » project. I like the idea of fulfilling a commissioned project, with their presupposed constraints and frameworks.
Submission of candidacy, the nomination, the beginning of the campaign, the mid-term point, the groundless rumors and criticisms, the end of the campaign, the in-between rounds of election with an advantageous position, the in-between rounds of election with a disadvantageous position, the electoral defeat, the electoral victory, as many discourses as a campaign’s stages…
In the logical progression of the work on language I’m pursuing within my different projects, this time it will be about confronting oneself to a political text, or rather to a male politician discourse, which in my opinion is not exactly the same thing.
Questioning oneself, not only as an artist but also, and in an inseparable manner, as a citizen, on the language which is displayed during this kind of discourses.
Studying them, working with them as a score, one of an actor: the narrator. And for this, inviting a psychoanalyst, Jean Michel Valta, and playing at interpreting (if it’s possible) the political discourse with a psychoanalytic point of view. The languages he’s using. What does he really say? How does he say it?